Universal Studios acquired video descriptions from WGBH Center for Accessible Media Descriptive Video Services (DVS®) for theatrical release of the fil Ray. However, the studio had not thought about providing descriptions on the Home Entertainment DVD, even though Ray Charles was blind and an avid user of video descriptions. This created a problem of denied access to entertainment for blind and low vision audiences.  The American Council of the Blind (ACB) approached EIN SOF to contact Universal and present the business case for creating an audio described version of the Ray DVD.

Another challenge was the compressed “window” between theatrical and home entertainment release — not allowing enough time to create a talking menu so blind customers could choose the DVS® track on the DVD independently.  Thus, a specialized DVD with DVS® was created.  EIN SOF, ACB and WGBH recommended, and Universal agreed to the same “street date” release as the standard DVD. 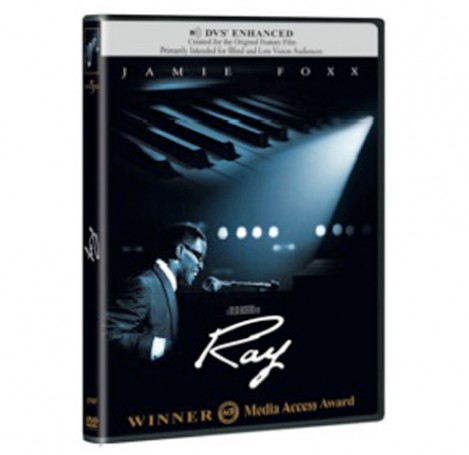 Descriptions were an asset purchased by Universal Theatrical from WGBH Boston’s Center for Accessible Media’s DVS® division. While the DVD and theatrical versions were not exact, the movie’s dialogue, scenes, locations, costumes, and facial expressions, were already described. The cost to reconfigure the narrations to match the DVD version was minimal in exchange for increased “access to entertainment” – thus increased revenue from blind and low-vision customers.

EIN SOF and ACB developed a direct-mail campaign (large print/Braille post card) announcing the Ray DVD with DVS®, and ACB Award to Ray and the film’s producers, disseminated to thousands of ACB members and other national disability leaders and media.