Enacted by Congress in 2002, HAVA sought to ensure that Americans with disabilities could vote independently and privately alongside their non-disabled peers. But has the law succeeded?

To answer that question, NCD gathered the experiences of nearly 900 voters with disabilities across the nation during the 2012 election cycle using an open-ended questionnaire which became the blueprint for the report. Experience of Voters with Disabilities also provides a comprehensive overview of how federal funds were used in an attempt to increase and insure voting access in the United States.

“The Experience of Voters with Disabilities report explores the physical barriers, attitudes, technological gaps, legislative hurdles, and polling place practices encountered by voters with disabilities in 2012,” said Jeff Rosen, NCD Chairperson. “By detailing how HAVA has improved voting access for Americans with disabilities in the past decade, we hope this report will be used to enhance civic participation in future elections and that our recommendations will be adopted by the Presidential Commission on Election Administration as part of its report which is scheduled to be released later this year.”

“People with disabilities make up approximately 1 in 5 of our nation’s population,” said Clyde Terry, Chair of NCD’s Policy Development & Program Evaluation Committee, “and yet 70% of polling places are still not accessible. A decade after the Help America Vote Act was signed into law meaningful action by election officials to guarantee the most fundamental right of all Americans – including those with disabilities – is not only warranted, it is long past overdue.” 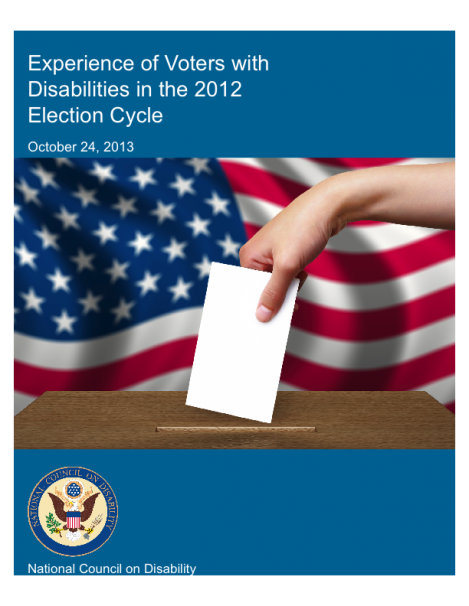 National Council on Disability Report: Experience of Voters with Disabilities in the 2012 Election Cycle; October 24, 2013

Physical Barriers: Americans with disabilities continue to face barriers in exercising their right to vote privately and independently due to architectural and physical barriers at registration and polling sites.

Nearly 40% of respondents to NCD’s questionnaire encountered physical barriers at their polling places.

Technology: Voters with disabilities do not have equal access to voting systems because states and localities have not invested adequate resources, planning, and training to provide reliable, accessible voting technology. 45% of respondents reported barriers inside polling places involving voting machines.

Discrimination: Voters with disabilities face discrimination at voter registration and polling sites resulting from poorly trained election personnel and volunteers. Nearly 54% of respondents encountered barriers, including attitudinal, inside the polling place. 20% of respondents said they were prevented from exercising a private and independent vote.

Accountability: State and local election officials must comply with all accessibility provisions of HAVA, the Americans with Disabilities Act, and other relevant voting rights and civil rights laws.

Access: States should upgrade and/or maintain voting equipment to assure fair, equal, and universal access for voters with disabilities.

Training: State and local election officials must invest in adequate training for all election personnel, staff and volunteers.

Adoption: The Presidential Commission on Election Administration should adopt recommendations made in the Experiences of Voters with Disabilities report in their own report to the President later this year.