The Americans with Disabilities Act  (ADA) passed the Senate and was stuck in the House by business that didn’t believe it was more than a legislative burden. At the same time, start-up film company Miramax acquired an independent film with an emerging star, Daniel Day-Lewis, about an Irish writer and painter with cerebral palsy, named Christy Brown, who could only communicate with his left foot. Miramax knew it was a powerful film, but wasn’t sure how to market it.  The film’s star, Daniel Day-Lewis did not have a disability. Movies with non-disabled actors encounter protests by disability activists — a non-disabled actor portraying someone with a disability like a white actor in “black face.”

Realizing My Left Foot was a powerful film in disability portrayal, and knowing Corporate America needed a business case to prove the Americans with Disabilities Act (ADA) was an unprecedented marketing opportunity, EIN SOF worked with Senator Harkin’s Senate Subcommittee on Disability Policy staff whom it worked with previously on the First Joint Congressional ADA Hearings with Mac and Me child star with a disability Jade Calegory, who gave powerful testimony in support of ADA.

Senate Subcommittee staffers Bobby Silverstein and Katy Beh Neas disseminated a “Dear Colleague” letter, composed an invitation (from congressional leadership on both sides of the isle) to attend the screening in support of disability rights legislation. EIN SOF and another PR firm activated a full-court PR campaign, with direct mail and sell-through to home entertainment (requesting accessibility features such as captions and video descriptions). 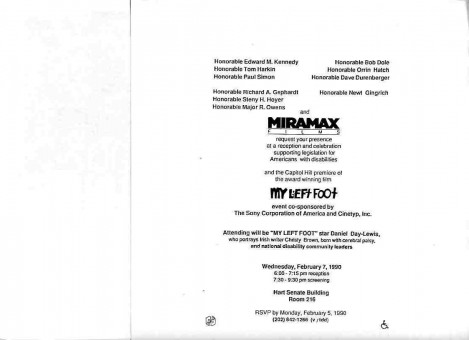 Miramax and congressional leaders Invitation to Capitol Hill Screening of My Left Foot in support of disability rights legislation.

EIN SOF successfully recommended to Miramax to consider pulling the film in movie theatres that were not wheelchair accessible to prove its commitment to the disability community market segment.  EIN SOF worked with grass-roots disability organizations like ADAPT and Independent Living Centers, who surveyed local theatres to follow the films “platform release.” In cities like Denver, with a strong disability rights presence, Miramax pulled the film from exhibitors if their theatre was not wheelchair accessible, and voila – the very first disability niche marketing campaign was born.

Disability-rights scholar and then-Stanford University professor Paul K. Longmore, Ph.D. the nation’s foremost expert on disability media images wrote a disability-perspective film review, The Glorious Rage of Christy Brown that was a symbolic “lightening rod” for disability activists to claim swift and un-amended passage of the ADA (it happened five months later). Campaign included Congressional screening on Capitol Hill (everyone got a handmade chocolate left foot and rose); and two-directional direct mail campaign with Longmore’s review that was sent to national disability leaders and the nation’s film critics at mainstream print and electronic media outlets. Plus grass-roots disability leaders were empowered to survey local theatres to ascertain level of accessibility to determine if the film would be shown there.